IS A POST-NUPTIAL CONTRACT, SIGNED BETWEEN HUSBAND AND WIFE WITHOUT A COURT’ SUPERVISION VALID AND ENFORCEABLE? THE CONSTITUTIONAL COURT 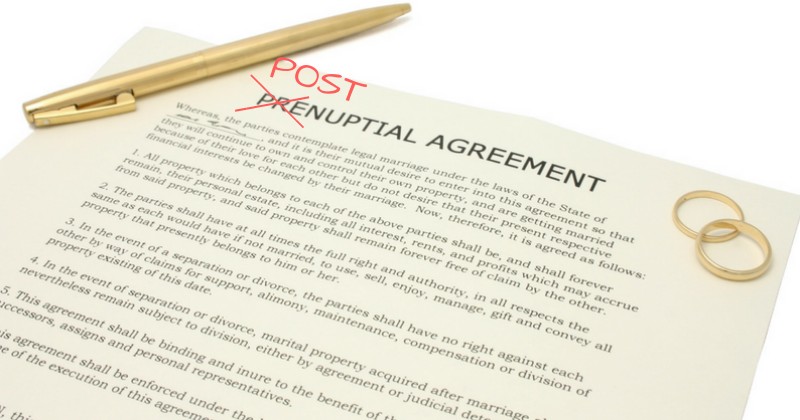 IS A POST-NUPTIAL CONTRACT, SIGNED BETWEEN HUSBAND AND WIFE WITHOUT A COURT’ SUPERVISION VALID AND ENFORCEABLE? THE CONSTITUTIONAL COURT

The case has been through the Regional Court in Mbombela, the High Court in Pretoria and the Supreme Court of Appeal (SCA) in Bloemfontein, before it reached the Constitutional Court in Johannesburg.

Mrs AM and Mr HM, employed as an accountant and chartered accountant respectively, were married to each other out of community of property with the exclusion of accrual on 28 August 1993. The antenuptial contract was duly registered.

In 2014, Mrs AM, drafted a document that purported to be a post-nuptial contract. The terms of the contract were that her husband (Mr HM) would set aside the ante-nuptial contract, Mrs AM would be entitled to half of his estate, and that the husband would pay her maintenance.

She presented the contract to her husband on two occasions during the same year, however he refused to sign. He eventually signed the contract on 10 November 2014, according to him, to maintain peace in his house and for the sake of their minor daughter.

When the Mr HM issued summons for divorce in the Mbombela Regional Court in January 2015, in a counterclaim Mrs AM sought a declaratory order to the effect that the post-nuptial contract was valid and binding on the Parties.

In a unanimous judgment on Tuesday 26 May 2020, The Honourable Justice Nonkosi Mhlantla found Mrs AM’s attack on the judgment of the SCA to be misplaced. In her arguments before the Constitutional Court, Mrs AM stated that her case will affect every person in South Africa who is married out of community of property. She further indicated that it was common for Parties married out of community of property to conclude various contracts, and the judgment of the SCA will affect these contracts, particularly contractual freedom.

Justice Mhlantla held that a proper interpretation and analysis of the judgment reveals the SCA did not prescribe a bar on all contracts between spouses married out of community of property. The SCA finding only related to their agreement, whose terms appeared to have the effect of changing the Parties’ matrimonial regime without being sanctioned by a Court order.

Justice Mhlantla further held that Mrs AM has also raised new issues before the Constitutional Court, issues which the High Court and the SCA had not dealt with, including contractual freedom, dignity and unfair discrimination. Justice Mhlantla furthermore held that it was accepted the Constitutional Court was better positioned when it was assisted by well-reasoned judgments from other Courts on a particular issue.

“Since the constitutional issues are raised for the first time in this court, it is not in the interests of justice to grant leave to appeal, the application for leave to appeal is dismissed.”

Previous Article: WHY YOU NEED TO HAVE A WILL
Next Article CAN I HOLD MY EMPLOYER LIABLE FOR CONTRACTING COVID-19 AT WORK?

For all official information and updates regarding COVID-19, visit the South African Department of Health's website at www.SAcoronavirus.co.zaOkayVisit website